Every once in a while there is talk amongst the residents and politicians about dividing the state in half, into North California and South California, but it has not happened yet. I think that even though the state covers so much ground, 163,696 square miles, that the northern and southern portions depend on each other economically for their strength in the national and world economy.

There is also a great diversity of attractions in the north and south, with mountains and snow, and Mt. Shasta and Lake Tahoe in the north, as well as other mountainous vacation resorts in the north. I'll point out some attractions of the southern area of the state in the paragraphs below. 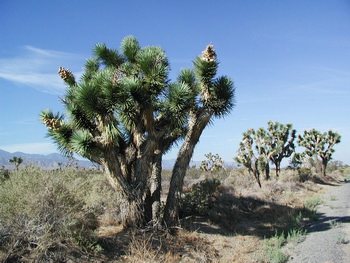 The photo features a Joshua tree in the Mojave Desert in the south-eastern area of California.

Most of the 20 inches of annual rain fall in the Sacramento Valley. Two major rivers, the Sacramento River and the San Joaquin River, fed by their smaller river tributaries run down the center of the Central Valley.

The Central Valley produces about 8% of the United States’ agriculture value. With the Central Valley geographically straddling both north and south, I don’t see how the land could be divided into two states.

To give credit to the south, there are the ocean resorts of Santa Barbara, San Diego, Los Angeles and more. And after all, think of all that Hollywood studios produce, and they are mostly surrounding Los Angeles.

Southern California houses the majority of the California’s military bases so that is another employment reason the north benefits from the south. This includes Air Force, Army, Coast Guard, Marine Corps and Navy installations.

The north and south have kept their peace, enjoying the strengths of each, and help out the poorer areas as needed. The width of the state is 250 miles at the widest and 770 miles long. That is a lot of room to have some natural or man-made attractions to suit all tastes.

Traveling around the state by car gives you access to the widest range of attractions, all under the roof of one state, with one set of rules, making it easier to move to another area without the fuss of learning new state rules. I found this was useful in moving 350 miles south of San Jose to the warmer town of Santa Barbara.

California is a large state and by keeping it one economy, I see the whole state - north, central, and south benefiting by the combined resources for the strongest economic growth going forward.