The Santa Barbara Old Spanish Days Fiesta is an annual event from Wednesday morning through Sunday, the first week of August. It is very dear to my heart as I have extended family dancing in the parade many years. 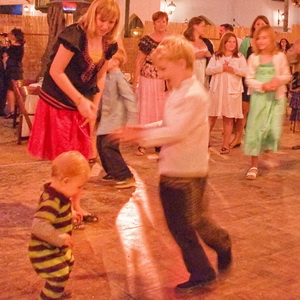 Even the Santa Barbara Mission is included with docent tours scheduled in each day. In the photo you’ll see a view of dancing downtown - all ages enjoying.

The Thursday, Friday and Saturday schedules are similar with each of the venues that are in downtown.

One of the highlights each year is dancing by the Spirit of Fiesta and the Junior Spirit of Fiesta. These two young ladies practice with their dance studios all year in preparation for the tryouts for the positions for Fiesta, and all the dances they will entertain with, along with the rest of the dancers from their respective studios.

Click on this YouTube video of Corrie Jimenez, 2013 Spirit of Fiesta, part of my Santa Barbara family, dancing Anunciación -

Seeing the Spanish dancing reminds me of the 2 summers I studied classical Spanish dance with Roberto Ximenez and Manolo Vargas at Jacob’s Pillow Dance Festival in Lee, Massachusetts.

In my opinion, the main event, not to be missed is El Desfile Histórico, the parade on Friday at noon from the west end of Cabrillo Boulevard and going up State Street as far as Sola Street. You may not see a larger equestrian parade in America.

All of Santa Barbara and surrounding communities turn out for Fiesta, it is a much anticipated event of the year.

For driving, Rt. 101 goes right through the city, which is about 100 miles north of Los Angeles.