It was a pleasure strolling through the rose garden in the front of the former home of Jiddu Krishnamurti in Ojai, California.

The garden was a peaceful place to sit and contemplate and I definitely felt uplifted. Krishnamurti lived there off and on from 1922 until his passing. 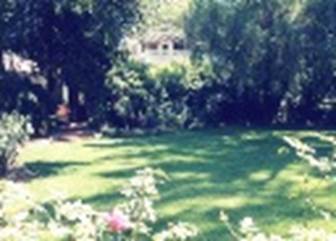 A philosopher and spiritual man, J. Krishnamurti (1895-1986), thought that each person should discover their own spiritual nature regardless of their beliefs or religion. He saw the innate connection and splendor even in objects.

Krishnamurti did not write books himself, but others have compiled his lectures and sayings. He did not wish to be looked upon as a leader with followers. My opinion is that his charm lay in the way that he encouraged others to look into the vast well within and pull up eternal insights for themselves.

The garden is open to the public and located at 1130 McAndrew Road, Ojai, CA 93024. Ojai is about a half hour drive inland from the coastal city of Ventura in Southern California.

To reach the Krishnamurti Library and garden by car from the center of Ojai, continue east on Rt. 150 and turn left at the intersection of Reeves Road. (This is the point where you would start to climb the mountain going to Santa Paula.) Once on Reeves Road turn left on McAndrew after about a mile.

If you are driving up from Los Angeles go north on Rt. 405, then north-west on Rt. 101. When you reach Ventura take the scenic route and follow Rt. 126 to Santa Paula and climb Rt. 150 over the mountain. At the base of the mountain turn right at Reeves Road, then left on McAndrew.

In 1996 the Pepper Tree Retreat was developed on 11 acres of grounds. Individuals or groups can stay in guest rooms and walk up to the original house pictured in my photo, which is now the Krishnamurti Library. Or, you can just visit, as my husband and I did and stay for a short time during the day. All the facilities are under the auspices of the Krishnamurti Foundation of America (KFA).

If you wish, check out the Pepper Tree Retreat web site for information on their offerings before making the pilgrimage to this inspiring place in Ojai.

Rand McNally Road Atlas for driving routes in California and the United States, Canada and Mexico.