Madame Ganna Walska - Lotusland is a public garden set in the midst of a private neighborhood in Montecito, California, close to the Pacific Ocean. Madame Walska was born in 1887 in Brest-Litovsk, Poland, as Hanna Puacz.

In 1941 Madame Walska, who had a singing career on both sides of the Atlantic, including New York and Paris, bought the 37 acre property, then called the Cuesta Linda estate, and named it Tibetland - later renaming it Lotusland. She died at Lotusland in 1984. 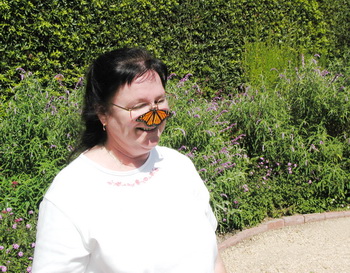 I took the 1 hour and 45 minute guided tour of Lotusland and was impressed with the many different tropical gardens and variety of plantings and stonework. Until her death Madame Walska was the head gardener and designer, but other landscape architects and designers added their expertise during that period.

After the tour a monarch butterfly landed on my nose - at certain times of year monarch butterflies hang in clusters from eucalyptus trees along the Santa Barbara County Pacific coast.

Read about my visit to the free Ellwood Monarch Butterfly Grove at the link below in references.

Some of my favorite attractions on the Lotusland tour included the sculpture garden with giant statues of cartoon-like characters sitting on a broad expanse of grass, and rocks in interesting shapes - some vertical like Siva lingams projecting out of bedding gardens of shredded bark.

The bromeliad gardens were impressive with their huge specimens, as was the pool that is edged in half abalone shells with their mother of pearl inner surface facing upward that catch and reflect the sun.

And I liked the formal patios closest to the pink stucco main house laid out in geometric shapes with complimentary stone and brick surfaces, and tall, skinny cacti planted in groupings that resemble people lined up together in a crowd, with groupings of succulents scattered throughout.

Lotusland is unique, quiet, uplifting, and brings peace to the heart.

There is an age-based admission fee for the tour with reservations required.

Meher Mount sits at 2,500 feet elevation on Sulphur Mountain between Santa Paula and Ojai. It is a pilgrimage site just a couple of hours from Los Angeles to the south and Santa Barbara to the north. This inspiring setting is dedicated to Avatar Meher Baba (1894-1969).

The day pilgrimage site is on 172 acres that is mostly wild, though the area around the main reception house and library, and the meadow down to 'Baba's Tree' is kept clipped short, so it is open and can be walked on.

First drive up the mountain to the reception house, sign in to let the caretakers know you are on the property, browse the library and when you are ready, they will direct you to the special coast live oak known as 'Baba's Tree'.

There you can sit and meditate on a wooden bench and look out over Santa Paula to the left, and the Pacific Ocean to the right, with a view of the Channel Islands beyond. It is truly breathtaking and so peaceful.

Meher Mount is open to visitors Wednesday to Sunday noon to 5pm, and closed Monday and Tuesday.

If you are driving from Ojai take Rt. 150 up the mountain as if driving to Santa Paula. Nearly at the summit you'll pass the entrance to Dennison Park. Go 2.5 miles further. Just past Twin Creek Ranch turn right onto Sulphur Mountain Road and go 2.7 miles to the sign on the left that says Meher Mount. The road gets narrower as you proceed. Park along the driveway before reaching the reception house.

If coming from Santa Paula take Rt. 150 until you pass the Summit Restaurant. Continue on for 1 mile to Sulphur Mountain Road. Turn left and go 2.7 miles to Meher Mount. Park just before the reception house.

Bring water to drink and a picnic if you'd like. Before your pilgrimage fuel your car and have something to eat as there are no concessions at Meher Mount.

It is certainly worth the trip. Driving up the mountain is a process that feels like driving up to the highest point in your own consciousness. Then, sitting under 'Baba's Tree' completes and adds the immeasurable blessings it has been imbued with by Baba. Enjoy.

Meditation Lessons for Teens and Adults