Mono Lake is located east of Yosemite National Park, near the eastern California and Nevada border. It is wider than longer - about 9.3 miles long and 13 miles wide at its biggest dimensions, and its average depth is 56 feet.

I have been listening to news about Mono Lake for more than 20 years - it has been given lots of attention because it almost dried up. But finally, in 1994 the State of California Water Resources Board began protecting Mono Lake from shrinking.

Visiting Mono Lake would make a good day trip for the family to observe its basalt tufa towers rising out of the water - they look like stalagmites found in caves. At one time the lake was so deep the tufa were submerged. 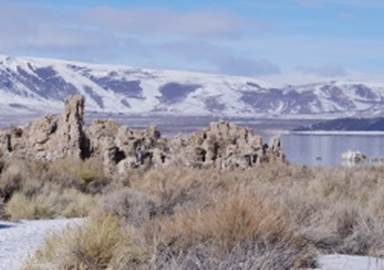 In the photo in the snow in winter see tufa rising out of the lake just beyond the scrub bushes.

If you’re driving from Los Angeles head north on RT 15 in Ontario until it connects with RT 395, and head north about 268 miles to Lee Vining.

Mono Lake has interesting features when compared to other inland lakes - it has no outlet, but is fed by Rush Creek, Mill Vining Creek and Mill Creek. Also the sediment at the bottom does not mix with the water at the surface. The lake water is alkaline with too much salt for fish to grow.

Tiny brine shrimp are the primary inhabitants and they feed on the prolific algae that grow in the lake in late winter and spring. The brine shrimp are a source of food for two million migrating birds, even seagulls from the Pacific Coast.

It is a geologically active volcanic area and is thought to be formed in its present configuration 760,000 years ago. The basin the lake lies in is thought to once be so large that it covered areas of now Nevada and Utah.

Because of its remote location I suggest getting your car serviced and refueled in a town at the beginning of your journey. Take along enough food and water for a few days in case of emergency, in addition to what you’ll be consuming on your drive and visit at the lake. Be sure everyone has clothes to layer against a dip in temperatures and desert wind.