Mount Shasta is a dormant volcano in northern California, in Siskiyou County, at the south end of the Cascade Mountains. It is termed dormant because it could erupt again, with the most recent eruption about 200 years ago. I have seen Mount Shasta from 100 miles away and it is an impressive sight like no other from that distance.

Its highest peak is 14,129 feet tall. I have hiked up to 12,500 feet elevation and then it was too hard for me to move forward very fast. I felt like my legs were made of concrete, and I got no further. 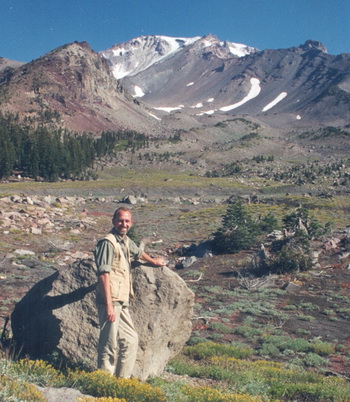 My husband and I had driven up Rt. 5 from the town of Mount Shasta, taking a road that winds its way up past 12,000 feet. Besides your body having to be up to breathing at that elevation, wear closed-toe shoes so you are not cut up by the lava rock, and sunglasses against the glare at the higher elevation.

Even if it is warm wrap a sweater around your waist to take care of lower temperatures if you are in the shade. Your car must be prepared with enough water and fuel and any other requirement the manufacturer recommends for driving to that elevation. We took this trip in late summer.

Notice in the photo that there is glacial ice on this peak, also see that the dark ground is lava rock, and it is not easy to walk over. In the background you can see that above a certain elevation the trees are not growing, instead there are scrub bushes.

There seems to be a sharp cutoff where trees suddenly grow shorter, than not at all. We watched this phenomena as we drove up the winding road to the higher elevation. We actually drove as far as permitted by car before getting out and walking.

On another visit to Mt. Shasta I camped with my family at 4,500 feet, and it was an inspiring time because, even in July the air was crisp and cool at that elevation, and the setting was the giant conifers lending a magical feeling. I found that at 4,500 feet I didn’t get elevation sickness or a headache.

When my husband and I drove back down to the town of Mount Shasta we had a family-style supper on a restaurant terrace, and found a reasonably priced motel room available to spend the night. The next day we drove north on Rt. 5 to Ashland, Oregon.

You won’t be disappointed by your trip to Mt. Shasta, however you enjoy it.

http://www.explorer1.com/mtshasta/motels.htm for restaurant and motel information in the town of Mount Shasta