The southern end of Sequoia National Park is located in Tulare County, California, and the northern end adjoins Kings Canyon National Park. You can approach from either the east or west slopes, but there are no roads crossing the ridge. If you want to stay accessible to visiting the General Sherman Tree use the western slope entrance.

These are the driving directions to enter from the west: From Bakersfield on Rt. 99, head north to Tulare, then east to Visalia, and take Rt. 198 through the town of Three Rivers. Shortly you’ll come to the park entrance. There is a per vehicle fee. Since the fees may change, I’ll refer you at the end of this article to the internet park page.

There are some free days listed. Do you like to camp? The Sequoia web site listed below gives that information, too. 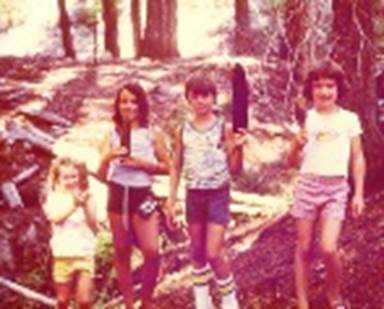 If you are taking a day trip you can stop for several of the big attractions along Rt. 198 in the park including viewing the sequoia - General Sherman Tree, billed as the oldest tree in the world.

All the sequoias are awe-inspiring to look at, take time to ponder all the world events they have lived through. In the photo take a look at the sequoias’ long pine combs the children are displaying.

Continuing past the General Sherman Tree heading north-west, you will continually climb in elevation. Little Baldy is at 8,044 feet, and then crossing into Sequoia National Forest you’ll see Big Baldy at 8,209 feet.

This might be a good time to mention that odd numbered roads run basically north to south, and even numbers indicate a mainly east-west route. This can be useful to remember if you get disoriented about the direction you are traveling. In California, though, at least inland, you can count on the sun to orient you to the direction you are traveling.

I also take a cooler on day trips with some food that will keep for a day as well as crackers or nuts to snack on while driving. I like to drink iced tea that I pour into my tall insulated mug filled with ice. Lastly, fill up the gas tank and put on your sun glasses for driving.

Enjoy your adventure amongst the sequoias, be inspired, snap photos to share with family and friends.