When I Realized the Holy Bible Was Not Originally in English

When I was about nine years old I began to read in earnest, and I loved picking up my First Communion missal (my mother with her missal in the photo) to read the weekly selections. Since I was born in Baltimore, Maryland, English was my native language. 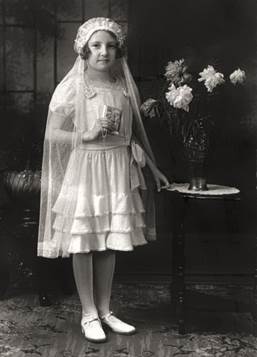 As a little girl, it came as quite a surprise to me when I learned in catechism lessons that the Holy Bible was not originally comprised of English texts. That it was originally Hebrew and then translated into Greek. It wasn't till the end of the 7th century that Old English and Middle English versions appeared.

Looking back, I think the realization that other languages preceded the English translation was when I started having ecumenical thoughts about the Holy Word being for everyone, no matter what language was spoken, or culture or country lived in. That everyone on our planet was part of our world-wide family and therefore a child of God.

Over the years I came to read the holy verses of other religions and cultures that were translated into English, and rather than see their differences, I saw the similarities running through. One, for example was the golden rule, to treat others as we wish to be treated. I use this guide as it was what my father used to say to me as a teen, espousing that it was how he lived his life.

After all, we all want to be treated well, and it makes sense that if our actions reap actions returned in kind, that being positive and caring for others was what we are setting ourselves up for in return.

Now as a retired world-wide citizen living mainly in The Netherlands, I have plenty of time to reflect and meditate deeply on the well-spring of spirituality that connects us on the unseen levels.

We have intertwined roots much like those of trees that are hidden from view beneath the forest floor, but nourished by the same elements of sun and water.

So our outer world of action and speech, geographical location and holy books are diverse, but underneath it all we are connected by the same element of spirituality.

In our inner oneness as spiritually supported beings I am content to be myself, and accept others in our diverse world as God's children, much loved, too.

Gentle Yoga and Meditation paperback or ebook for adults

Yoga for All Kids paperback or ebook