Lessons in Charity Learned from My Dad 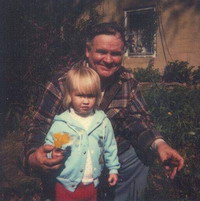 My father retired after 40 years in the workplace, but he didn’t stop there. He began to help those in need both young and old.

Rather than devising parts for the aerospace program as he had during his earning years, he devised and carried out plans to alleviate hunger in those less fortunate living nearby.

While living on the West coast, I didn’t find out what he was doing for others until I visited him back East one summer, when he was about 65 years old in 1990.

Dad said: ”Let’s take a drive, I want to show you something.”

Off we drove about 7 miles south to a more rural location and stopped next to a mailbox leading down a gravel drive to an old clapboard house.

We didn’t see anyone standing about and didn’t go up to the house, but from the car Dad told me that he paid the 2 middle aged women who lived there $100 each time they cleaned his house, usually once a week. I was very impressed that he was kind to these ladies, giving them work without a handout.

Later in the day we drove to a summer house down on a back creek of the river where Dad lived, (and where he and I grew up). This was a poor family indeed, and the father was a disabled veteran.

Dad was carrying a small bottle of whiskey which he surreptitiously passed to the man of the house. The family invited us to join in celebrating a daughter’s birthday, but when I saw the very small cake that a half box of cake mix would make, I politely made the excuse that we had just eaten.

But, there is more to my Dad’s involvement with this and other needy families on the river: at night he went grocery shopping, and secretly left bags of food on their front doorsteps.

This was my father in action for the poor during a time he could have been off playing pool with his buddies.

And, you should have seen the smile on his face while he was telling me about his works of charity. The photo with this story will give you an idea of that smile.

I learned a lot on that trip about charity. It may begin at home, but little acts mount up and can do so much for those around us. By acting in a respectful way it is possible to help those less fortunate maintain their dignity in the face of charity.

The reward for giving to others is the goodness, the raised energy we feel in our bodies while sharing. It is so pleasant that it doesn’t need to be acknowledged by those receiving.

I’ve learned that family really includes everyone on the planet, not just those of our nest, and I’m sure we’ll eventually discover that we’re part of a universe of people spreading out to infinity.

When we leave this planet we leave the cocoon of the physical world behind, but in the unlimited expanse of spirit we join a multitude in the embrace of familial and unconditional love.

By being charitable we get a foretaste of our home in heavenly harmony to come.

Gentle Yoga and Meditation paperback and ebook for adults

Yoga for All Kids paperback and ebook