This is a true story and I'm lucky to be alive to tell it. At the end decide for yourself who really helped me.

It was Christmas Day, 1998. I was living near the Pacific coast just north of the UCSB campus. My children were grown and came by for an early morning visit and by 11am the house was empty; I had the rest of the day to myself. Since it was nearly 70F. outside, I decided to walk across the bluffs and down to the beach, seen in the photos in this story.

Against the cliffs sand has accumulated and you can walk for miles and miles at low tide. With the warm midday sun, I dressed in jeans, tee shirt, walking shoes and wool socks.

The tide was still out and the protruding rocks were very tempting to walk on, just as you see in the photos. So, I carefully walked out about 300 feet and then turned around to look back to shore. To my horror the waves that I had noticed washing by me were the incoming tide. My beach near the cliffs was nowhere to be seen, only the tips of the rocks I had carefully walked out on were visible. 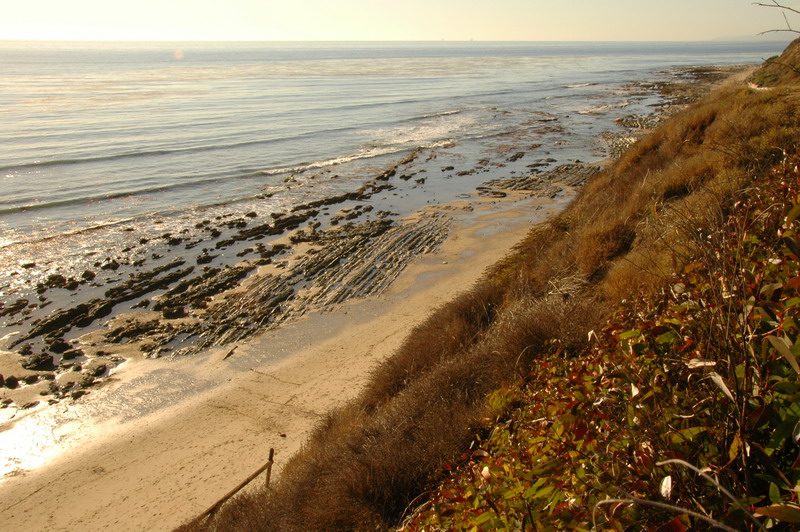 Panic set in as I wondered and tried to plan how I could get back to shore with just those scattered rocks showing. The ocean was too cold to swim in without a wet suit the end of December and there was no way to swim over the rocks, anyway, getting caught in a crag was a danger.

I felt panic and desperation rising because I had put myself in such a dangerous position, and hadn't checked the low and high tide tables before walking down to the beach.

As a last ditch try I faced out to the ocean horizon, closed my eyes, prayed to God to give me guidance within the next 2 minutes, or I would have to surrender myself to the surf in an attempt to reach shore. 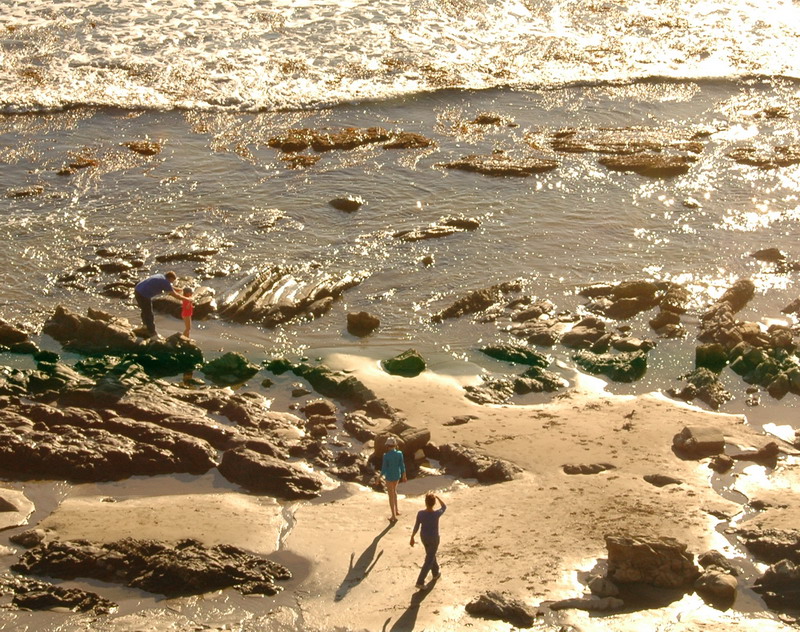 When I opened my eyes there was a man standing 20 feet in front of me.

Of course I couldn't believe how this could be. He appeared in his late 20s, early 30s with long dark brown hair, dressed in khaki Bermuda shorts, no shirt, no shoes.

I asked him where he came from and he said he was a biologist visiting UC Santa Barbara from UC Santa Cruz. That seemed plausible.

He said that if I would follow in his footsteps he would lead me safely to shore. I did not question him.

The man turned in a westerly direction, parallel to the coast and we began our 'follow the leader' trek. I concentrated intently step by step as we made our way in the ocean without seeming to get nearer to land. As we walked like this for 3 hours the distance between us gradually lengthened. Then, ahead to our right I saw how I could reach the sandy beach of Dos Pueblos Christmas Tree Farm.

I lost sight of my guide as he turned a bend in the coast. Firmly and thankfully on dry land I asked a ranch hand who was walking nearby to drive me home.

The journey had lasted 3 hours on the ocean and I never fell in though my shoes, socks and lower pants legs were wet. I was definitely cold from the effects of the ocean water.

Who was this guide who appeared out of nowhere and saved my life on Christmas Day 1998? And I think about his choice of words to follow in his footsteps as having a deeper, spiritual meaning.

Looking back I find it remarkable that he practically skipped over the rocks ahead of me as we headed in the direction opposite of the university.

I do believe that the Divine appears to us in our hour of need in the form necessary at the time.

If an angel with wings had suddenly appeared in front of me in the ocean I would probably have died of fright. But the young athletic form of a physical man gave me confidence to follow.

My ecumenical Christian roots allow me to be open to the fact it may have been our beloved Lord Jesus Christ, incarnate, or a yoga master serving humanity such as Babaji, who is said to be living on earth with a small band of disciples who bodily dematerialize and reappear from place to place. Or maybe this was an angel taking on a convincing physical body for this service?

When I got home I took a hot shower to get warm, then I emailed my step-father about my experience; he firmly impressed on me not to go down to the ocean alone again. I knew I was lucky to be saved.

NEW ˗ Further afterthoughts, 20 years later: When telling this story to my husband, he said that Santa Cruz can mean Holy Cross. I now think it was Jesus who led me over the ocean to the safety of the shore. I remember he also said to follow in his footsteps, a further confirmation of his identity as Jesus. I feel very blessed and every more firmly on my spiritual quest.

About the Author: Susan Kramer is a graduate of Peabody Institute Preparatory Dance of Johns Hopkins University, and a former Peabody Institute, Jacob’s Pillow, and Baltimore Opera Company dancer. Currently she is a classical yoga teacher and international author and lives with her husband, Stan Schaap, in The Netherlands. Her web site is http://www.susankramer.com and email susan@susankramer.com